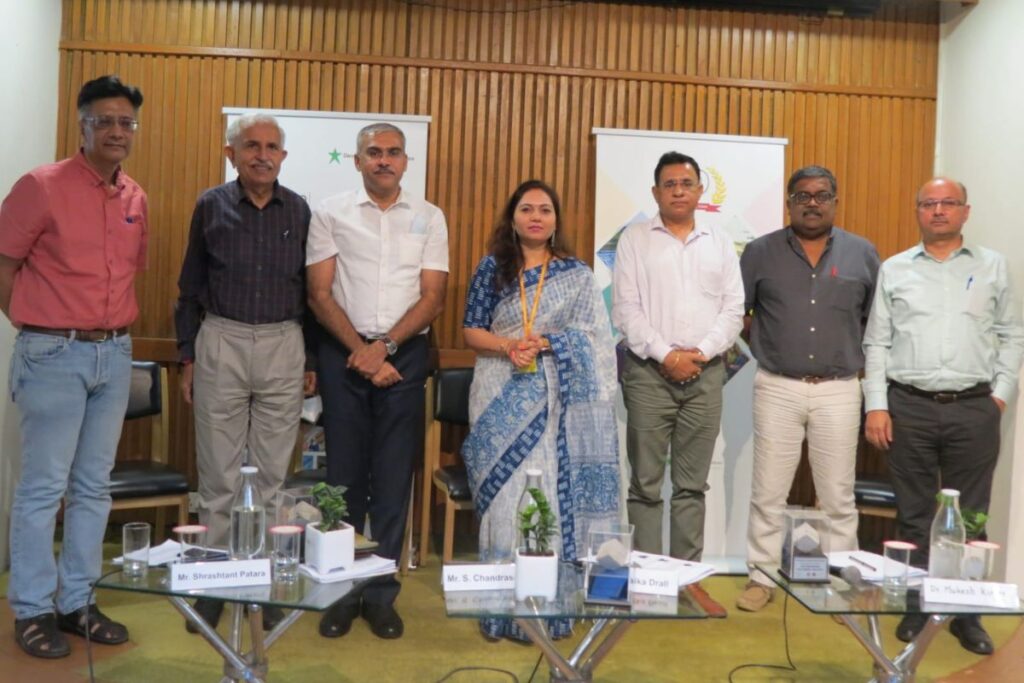 The discussion arrived at a consensus that the best way forward is to adopt transformative technologies that help in decarbonising the cement industry. This needs a strong commitment and cooperation on the part of the cement industry, government, institutions, civil society and academia.

DA Group in association with École poly technique fédérale de Lausanne (EPFL) Switzerland, Indian Institute of Technology Madras and Delhi, and Universidad Central “Marta Abreu” de Las Villas, (UCLV) Cuba, supported by Swiss Agency for Development and Cooperation, India, Embassy of Switzerland have been working from the last decade on Limestone Calcined Clay Cement (LC3), which is seen as a major innovation to reduce emissions. LC3 reduces the clinker factor in cement production by the addition of calcined clay and waste limestone. While LC3 has become a cement of choice in over a dozen countries in Africa, South America, and South East Asia, the standards for commercially producing LC3 in India is at the final stages with the Bureau of Indian Standards (BIS). It is expected to be published very soon.

TARA the “incubation engine” of the DA Group in association with IIT Delhi and IIT Madras has worked towards commercial production of LC3 in India. Lately, it has been a preferred technology and knowledge partner with large conglomerates in the sector such as JK Lakshmi Cement for the commercial production of LC3. It is hoped that with commercial use of LC3, India will be able to provide a profitable and viable solution against the adverse effects of climate change and achieve the nationally determined commitments made at COP26 by the Honourable Prime Minister of India, Shri Narendra Modi.

During the trialogue 2047, Ms. Ruchika Drall, Deputy Secretary, Ministry of Environment, Forest and Climate Change, GoI, said “Industry’s transition to low carbon pathway is important to meet the India’s goal to net zero by 2047. Leadership for industry transition (LeadIT) is one such initiative by the government of India to support transition of hard to abate sectors.”

Mr. S. Chandrasekar, IFS, Member Secretary, Bihar State Pollution Control Board, said “In order to become a carbon-neutral state by 2040, Bihar is working on a long-term strategy for low carbon and climate-resilient development, partnering with organisations such as The Development Alternatives Group. Recently, we have completed a study on GHG inventory of the brick sector with the help of Shakti Sustainable Energy Foundation and Development Alternatives Group. To reduce emissions from the bricks sector, we promote fly ash technology in the state. There are over 500 fly ash brick enterprises in the state. We have also initiated GHG (Green House Gases) inventorisation of the cement plants in Bihar. LC3 will play a significant role in the state as well as in the country to minimise emissions.”

Dr Soumen Maity, Vice President, Development Alternatives, said “We have been at the forefront in ensuring the decarbonisation of the cement industry. We have been working for over a decade to reach this juncture where a synergy between public and private partnership can be created. With the “trialogue 2047″ we hope the PPP approach will facilitate the final goal of decarbonisation.”

Dr Mukesh Kumar, R&D Head, J.K. Laxmi Cement Ltd, said “Our Company, JK Laxmi cement Ltd is involved in decarbonisation of cement production in various ways. JKL has signed an MOU on 3rd May 2022, in collaboration of TARA in presence of Shri Arun Kumar Shukla, President of JKL and Dr S.K Saxena.JKL has produced 5million tones of LC3 cement the year 2016 in collaboration of IIT Delhi and TARA.