Anup Thapa and Veeraj Rao , A Director and Actor duo gearing up for their 2 movie …. “SHUKRDOSH” 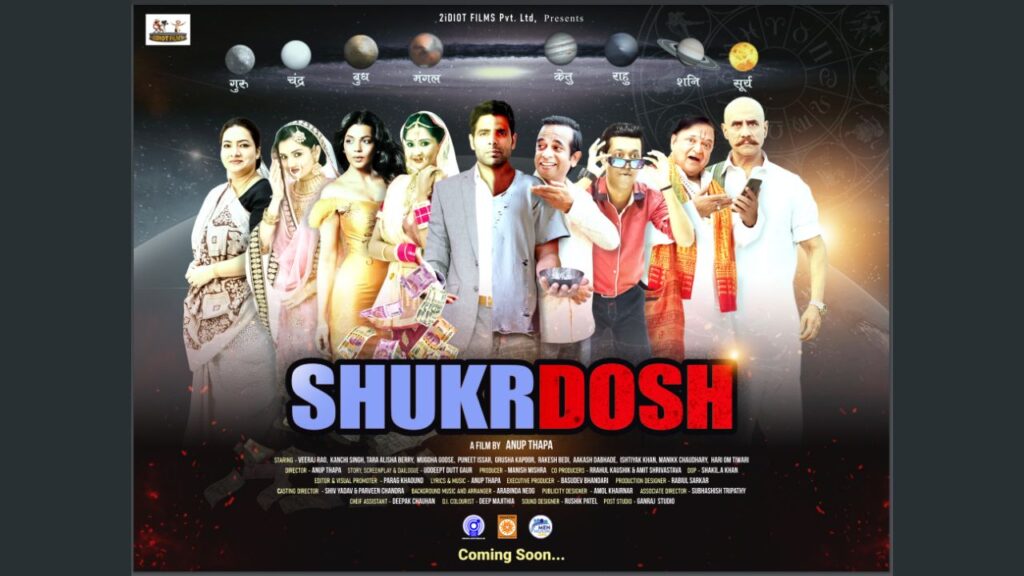 We put some light on story, the current north south equation, How challenging for new actor &  filmmaker  to realese their film on OTT and lot more… So let’s meet Mr Anup Thapa , Talented Director and Energetic and Talented Mr. Veeraj Rao..

1: Great, to see both of you again … Before coming to movie. How do you guys met… A director- actor duo… Congratulations on your 2nd movie poster release…?

Anup: Thank You for attending the poster release, and I first met him( Veeraj) in an institute….
Veeraj: I met Anup Sir in an Institute.. Sir was faculty over there and he use to write and direct plays.

Now he is my director, But first  he was my teacher in that Institute And it was in my fate to join that Institute as I never planned to join, I went there for my brother because he asked me to join an acting institute and i want to become  an actor from my childhood. So I stayed there and it just clicked.

Both: Thank You… And thanks again for attending our poster release.

2:Who wrote the movie?

Anup: In the first film, I served in many departments like writing, lyrics, music, choreography and sometimes production. But thankfully in Shukrdosh I have met great writer Udeept Dutt Gaur he had written my next.

3: What was the inspiration for the movie?

Anup: In every film I am inspired by real people & real events…I am not an out of the box type filmmaker, I believe in simple story telling which connects & related to common world with the flavour of entertainment.

4: What was the backstory behind the movie being made?

Anup: Lockdown….is the main reason actually everyone was stuck at home without work in 2020. Then I met Uddeept ji and I found this story to be a unofficially sequel to Yeh Mard Bechara. It’s a journey of a man who is full of love and life and how he gets entangled in superstitions and his problems.

5: How did casting of the stars happen? Was Veeraj the first choice for main lead?
Anup: No…no one is my first & last choice in any story, its a character demand & our  (actor & director) destiny. Jodiyaan asmaan mein  banti hein or filmein zameen mein..

6: What role did each producer / producing company play on the movie?
Anup: Producer & Production play most important roll in film making…My first film was low budget and the production was new, that’s why the lack is felt in the film. But in the end story and performances matters that will make or break any film. Thankfully I have both..

Veeraj: There are lot of people and critics who appreciate my act also said the same thing which I portrayed.. So now the final decision will be from audience whenever a film will come on OTT or TV. So I talked about both the critics…but definitely in terms of acting I am still learning and will definitely do more better in another films..

Anup: Mixed but in my opinion. There is 2 type of criticism constructive & destructive..
I believe in constructive so those who judged my film on the basis of my story and budget took them positively. But those who only want to bring someone down and consider themselves to be a big critic, a big thank you to their criticism. In fact biggest critics are our audience…they like I like they didn’t I feel sorry.

Anup: Because a lot has been talked about women’s issues, it is happening and it should happen. But in today’s society men also have many problems. I believe mard ko bhi dard hota hai vo bhi bechara hai. We heard about women so many times so it is the time to speak about the men as well.

9: When we talk about issue.. tell about this north vs south viewership and content issue… Why South movies successful?

Anup: The biggest problem of Hindi films is that now projects are being made, not cinema. When more than the story and artist of the film, it is emphasized that first there should be a salable actor in it, what is going on is to be made. The second problem is that Hindi cinema has been cut off from its roots; it copies English films, talks like them and thinks.

Third in our films we are not showing the culture related to our story and the feelings of the people. Hats off to South cinema they are doing this …they are technically more advanced & they try to do experiment they love their language, roots & culture..

10: Do you really think it OTT makes difference and give chances to new comers… Is it a boon or Bane?

Anup:  Yes OTT has given work to many new people but those films and series are either of big actors or production houses. Getting approval from OTT is more difficult than getting moksha for a small filmmaker. Cinema halls give a chance by spending at least a little, but OTT platforms think like a secret games Gaitonde  that they also feel they are the only God. Small filmmaker still struggling Small filmmakers still have a long battle to fight.

Veeraj: Yeah, something definitely change. But i would say there is chance for new comers.  It is true that OTT platform generated lot of works for the actors and whole film industry. But for any film the production houses always demand for a renowned actor and also OTT asked for the same.

11: And coming back to big vs. small, nepotism vs. new comers… , Do you really think it’s their or content and acting skill matters?

Anup:  Nepotism is in every field but it depends how you take it. Like in a clinic the doctor’s son who is a doctor was treating people but now the patient has to decide that he should get treated because he is the son of a doctor or he is a good doctor who can treat them well…In the same way, the audience has to decide whether it becomes Ranbir Kapoor or Tusshar Kapoor…for me as an filmmaker, an artist should be a good actor, wherever he may be.

Veeraj: Sir this is my first film and I already shot second but i did not feel any nepotism till now because I am not in that or this lobby. I did not pass through it so for now i did not know anything how that happens and where that happens? But I am sure there is certain a priority for the industry people because they come from the industry and also there parent do lot of thing here. This happen all around like if a doctor child want to become a doctor then his parent will not do.. But at the end skills and content matter. But your content should reach the audience where i can say that the outsider does not have that platform or he cannot get that platform easily.

Anup: We are trying to release on 14 Feb (valentine day) lets fingers crossed

14: Any other projects after this?

Veeraj: Yeah Sukradosh is in post-production and also i signed 2 film ‘ Untitled’ one of the  shooting start next year from Feb- Mar hopefully.

15: Are we looking forward to any other projects from same duo?

Anup: I have just signed 3 films & maybe you will see our pair in one of them.