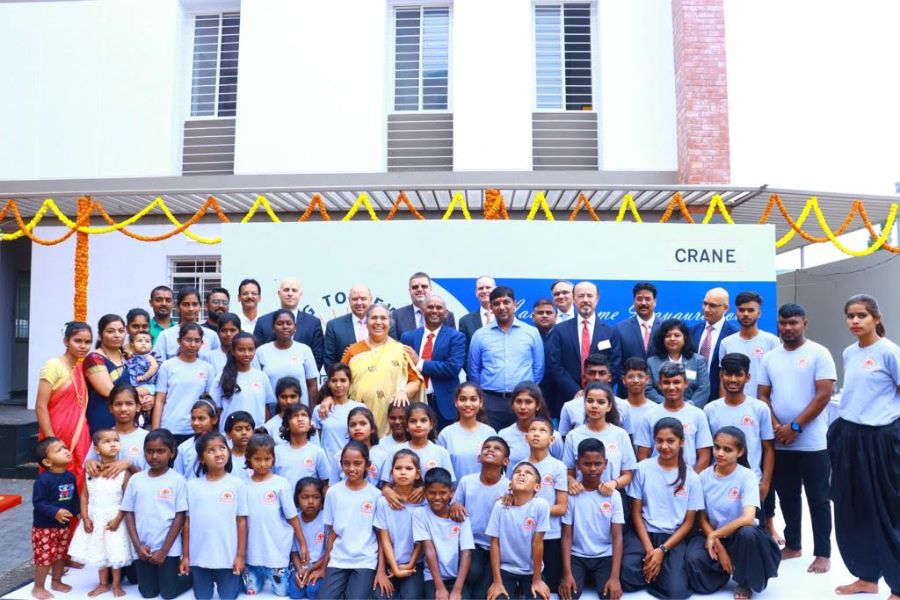 Crane inaugurated the first sponsored Maher building in Satara in 2019 and celebrated the groundbreaking of two additional buildings in Oct 2020. The construction was completed during Covid at present; the Maher campus consists of three buildings constructed with funds donated by the Crane Funds and will house approximately 100 children – both boys and girls, making it a safe haven for these underprivileged residents.

“Crane India has been an influential force in the country through our contributions and investments in local communities over the past 30 years. Along with the new Engineered Check Valves factory inauguration, today we have also reaffirmed our partnership with the local NGO Maher by opening the next building within the Crane- funded Maher Home complex for disadvantaged children in Satara”– said Hari Jinaga.

“Maher (in the Marathi language) means ‘Mother’s Home’: a haven of hope, belonging, and understanding. Our mission is to help destitute women, children, and men from all over India exercise their right to a higher quality of life, irrespective of gender, caste, creed, or religion”, said Sr. Lucy Kurien. “Maher is deeply grateful to Crane and its local leaders for this gracious act of generosity and benevolence on its part and thanks to it for the trust and confidence it has shown in Maher”.

Over the past decades, Maher has thankfully witnessed Crane’srelentless commitment to independent charitable programs which provide assistance to Crane associates and their families, to local communities, educational institutions, and worldwide relief efforts. The recent ceremony is a confirmation of Crane’s meaningful culture, in keeping with the philanthropic nature of Richard Teller Crane who laid the groundwork for the widespread support that they are able to extend today.

Maher has come a long way since its humble beginnings in 1997. Today Maher is an UN registered NGO – Non-Governmental Organization. Over 4000 women and children have passed through the Maher experience and come out brimming with self-confidence and dignity. Those who cannot be reunited with their families, because of a trauma or other complications, continue to be looked after under Maher’s watchful care, and many stay on, fully rehabilitated to work as housemothers or assistants. All inmates receive the highest quality diet, medical attention, and psychiatric counseling available, irrespective of their caste or religion. All human beings and all religious faiths continue to be treated equally and all major festivals are celebrated with the same fervor. Maher is present in over 85 rural communities around Pune as well as locations in Ratnagiri, Kerala, and Jharkhand.

If you have any objection to this press release content, kindly contact pr.error.rectification[at]gmail.com to notify us. We will respond and rectify the situation in the next 24 hours